Where is Costa Rica situated on the map?

Costa Rica is situated in Central America and has a border with Nicaragua in the North and a border with Panama in the South. In the west the pacific ocean is the natural border and in the east the Caribbean sea.

How many provinces has Costa Rica?

Costa Rica is separated into 7 provinces: Alajuela, Cartago, Guanacaste, Heredia, Limon, Puntarenas and San Jose. The provinces are separated in cantons and the cantons in districts. Provinces are responsible for the road conditions, public lights and garbage collection.

How many inhabitants has Costa Rica?

For what do the colors of the Costa Rican national flag stand for? 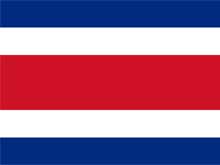 The national flag of Costa Rica.

The blue represents the sky, white the peace and red the blood spilled for the freedom.

How is the climate in Costa Rica?

Costa Rica is 1 of the ten rainiest countries on earth! Yearly temperature changes are minimal due to the location in the tropical climate zone. The yearly maximum and minimum temperatures fluctuate minimal, between 1°Celsius and 3.7°Celsius. But the daytime temperatures can fluctuate up to 10°Celsius.

The dry season lasts from December till April on the pacific site and in the central valley. The following long rainy season only slows down in July, this period is called the small summer "Veranillo de San Juan". The Caribbean coast does not have a rainy or dry season, the rainfall is relatively consistent year around there. The month September and October are dryer on the Caribbean side of Costa Rica. During the driest moments on the pacific site the Caribbean site experiences the heaviest rainfalls.

In the higher altitudes it usually rains in the early afternoon, on the pacific coast in the afternoon and in the Caribbean in the evening and at night. During the dry season the daily sunshine duration is at it's maximum. In the green season this time is reduced due to the fact that the sky is often covered with clouds. Sunrise is at 5:30 am and sunset at 6:00 pm. In the Central Valley the yearly average temperature is 23°Celsius (73.4°Fahrenheit), at the pacific and the Caribbean coast 30°Celsius (86°Fahrenheit). Costa Rica is a humid country. The relative humidity in the Caribbean is 88.75% and on the pacific site 72%.

What kind of sport is popular in Costa Rica? 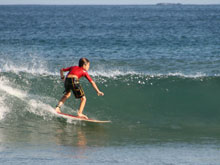 Soccer is without any question the most popular sport in Costa Rica. The smallest villages have a soccer field in Costa Rica and in San Jose the Ticos play soccer at every corner of the Sabana Park. Indoor soccer is especially popular during the rainy season. Baseball is popular amongst Nicaraguans and in Limon. Tennis and Golf is played by wealthier Ticos. Many teenagers also like to play volleyball or basketball. Surfing is exercised on both coasts, Costa Rica has their own national championship in surfing. Mountainbikers, road racers and joggers are visible all around Costa Rica. Despite the bad road conditions road racing is highly popular in Costa Rica. Motor sports like motocross, rally and races on the race track constantly attract large crowds of spectators. Billiards tables can be found in many bars and is mostly played by men.

Are there any poisonous animals in Costa Rica? 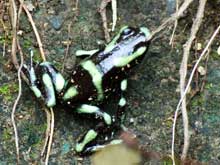 This poison dart frog is only 1,6 inches long.

Besides 18 different kinds of poisonous snakes there are some sporadic tarantulas in Costa Rica. The poison of the tarantula only provokes a itching in humans, is therefore not really dangerous. With the poison from the poison dart frog the Indians used to poison the tips of their arrows. Further amphibians are the poisonous tree frog and the cane toad. As long as you don't eat the frogs or toads they are no threads to humans.

What kinds of snakes live in Costa Rica? 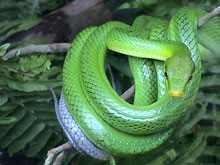 150 different species of snakes live in Costa Rica, but they are not very present. only 18 of those are poisonous, one of those is the bushmaster, the longest venomous snake in America. The biggest snake that is domiciled in Costa Rica is the boa constrictor, she can get up to 4.5 meters long. She lives on the ground and is not poisonous and not harmful for humans, but one shouldn't provoke her either.

What is the best protection from mosquito and other insect bites?

The best protection against mosquito bites is the frequent use of insect repellent and long light cloth in areas with many mosquitoes. The amount of registered cases of malaria in the last years was very low. The cases of Dengue have gone up in the year 2007, especially in the cities Limon and Puntarenas. The mosquitoes that transmit the dengue virus mostly bite during the day and not in the evening or at night. Especially near standing water a good protection is recommendable.

What is the name of the Costa Rican currency?

The local currency of Costa Rica is called Colon. The annual inflation used to be around 10 %, but that has become better since 2006. Before changing money one should inform himself about the actual exchange rate. Dollars are excepted, especially in the tourism sector, but not everywhere.

What are the main tourist attractions in Costa Rica? 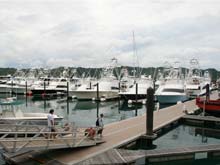 Costa Rica is one of the most popular sport fishing destinations in the world. This is a photo of the Los Suenos Marina, Herradura.

The biggest attraction in Costa Rica is without a doubt the variety of plants and animals. In the national parks it is possible to marvel exotic plants and watch animals in their natural surroundings. Unforgettable is a visit to one of the many volcanoes in Costa Rica, the country is situated in one of the volcanic most active zones of the earth. Out of 42 active volcanoes in America 7 are in Costa Rica. In addition there are 60 sleeping volcanoes. On some of the volcanoes it is possible to walk up to the edge of the crater.

Most of the historic buildings, like the National Theater, are located in San Jose.

For sunbathers there are many wonderful beaches on both coasts.

Active people that visit Costa Rica for surfing, fishing or golfing have a great variety of options to choose from.

Which personalities are from Costa Rica? 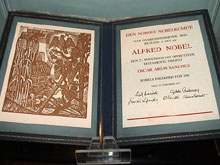 The nobel peace price from Oscar Arias Sanchez is exposed in the national museum.

On April the 11. 1856 the drummer Juan Santamaria set the fort of William Walker and his troops on fire and helped to expel the invaders from Costa Rica. The April 11. is a national holiday and a statue in Alajuela reminds of this heroic act.

The present president, Oscar Arias Sanchez, was honored with noble peace price for his peace plan for Central America. The certificate can be seen in the national museum in San Jose.

The in Costa Rica born astronaut Franklin Chang was several times in space with NASA. He has a high reputation amongst Costa Ricans. Since many years he is involved in the development of a plasma engine for rockets. Since 2006 he is working on a serviceable Plasma motor with is company Ad Astra Rocket in Liberia.

One of the most successful athletes is the swimmer Claudia Poll whom won a gold medal in the 1996 Olympic games. Later on her medal was denied because of questionable doping results. Since August 8. 2007 Claudia Poll is mother of the daughter Cecilia, she was born in Clinica Biblica in San Jose.

Brisa Hennessey, Leilani McGonagle and Carlos Munoz are some of the best surfers of Costa Rica. They compete in international surfing tournaments. Brisa Hennessy has been on the WSL's Women's Championship Tour since 2019. She is qualified for the Tokyo Olympic Games.

Kenneth Tencio, from Cartago, is one of the world’s best BMX Freestyle riders. He is qualified for the Tokyo Olympic Games.

The name Paul Cesar Wanchope is known amongst all Costa Ricans. The abroad playing soccer player used to play in attack of the national team of Costa Rica.

Ernesto "Lobito" Fonseca was Costa Rican Champ in Motocross and raced many years successfully motocross and supercross in the USA. He regularly placed in the top 10.  With Yamaha of Troy he won the AMA 125 Supercross Championship in 1999 and 2001. In 2006 Ernesto Fonseca had a serious training crash and broke 3 vertebras. Since then he lives again with his family in Costa Rica.

Where can I rent kite- or surfboards in Costa Rica?

The Arenal lake offers perfect conditions for windsurfer and kite boarders. On the west bank several hotels rent boards, sails and offer classes. The Bahia Salinas, situated on the same latitude as Liberia more or less, the conditions are good as well. Many kite boarders travel further north, because of the strong winds that blow from lake Nicaragua. Windsurfing and kiteboarding are for sure no popular sports in Costa Rica, even though the conditions are very good!

When is the best time of the year to see sea turtles in Costa Rica?

The olive ridley sea turtles nest all the year round in Playa Ostional, Playa Llorana, Corcovado, Sirena, Madrigal, Carate, Matapalo as well as Playa Nancite, on the pacific coast.

The green sea turtles nest on both coasts, the Pacific and the Caribbean. On the east coast of Costa Rica they can be observed Tortuguero, Gandoca and Manzanillo. On the west coast this species of turtles lay their eggs in Ostional, Playa Nancite and Drake Bay.

Like the green sea turtles the leatherback sea turtle can be seen on both coasts of Costa Rica. On the Pacific coast in Playa Nancite, Playa Ventanas, Playa Langosta and Playa Grande. On the Caribbean coast in Tortuguero, Gandoca and Manzanillo.

The nesting beaches of the hawksbill sea turtle are Cahuita, Puerto Varga and Tortuguero on the east coast. On the west coast this species can be observed in Playa Grande, Playa Llorana, Playa Nancite, Corcovado, Sirena, Madrigal, Carate and Matapalo.

When is the best time of the year to see whales in Costa Rica?

Costa Rica has the longest humpback whale season in the world, almost all year round! Costa Rica’s Pacific coast is the best place to go whale watching. On the Caribbean Coast Bottle Nosed Dolphins can be observed, but it is difficult to encounter humpback whales.

Humpback whales from the southern Hemisphere travel from the Antarctica to Costa Rica to stay in warmer waters. They can be observed in Costa Rica from July till November.

The whales from the Northern Hemisphere travel from Alaska to Central America. They can be observed on the Pacific coast of Costa Rica from December till April.

The easiest way to spot whales is with an excursion by boat, but it is not absolutely necessary. The humpback whales are relatively easy to spot because they congregate close to shore. Most often you can see the spray of water or they surface and slap their long fins.

When is the best time to visit Costa Rica?

This question cannot be answered in general. If you plan to travel the Pacific coast and want to have as much blue sky as possible, you should plant to arrive in the dry season. In the Caribbean, however, the months of September and October are dryer. It is to be noted, that some routes are not passable during the rainy season! Unpaved roads and routes on which one has to cross rivers. On the other hand, one does not suffer under the dust on gravel roads in the rainy season.

In the rainy season, hotels, car rentals and flights are much cheaper than in the dry season. In addition, there are considerably fewer tourists in the country.

Costa Rica is a year-round destination. Everyone should choose the best travel time according to personal preference.