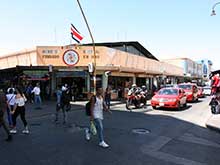 This self-guided walking tour will show you the highlights of San Jose. It will take you to some of San Jose’s absolutely unmissable attractions – including a few that you can taste. Many tourists have some time to kill in San Jose at the beginning or end of their Costa Rica vacations. This self-guided sightseeing tour of San Jose can be absolved at any time of the day and it is not necessary to complete it. You can split it into two days or just pick out the things that sound appealing.
We created a tour that takes you to the well-known sights of San Jose, like the National Theater, the Mercado Central and the Postal Office. We put emphasize on coordinating the tour that most of it is along the pedestrian zone. In addition to that you will pass several parks and museums. One can prolong the tour with a visit in a museum or a stroll in the park. There are several options to grab some food along the way. Besides you will pass super markets, pharmacies and banks on your walk. Options to grab some groceries, needed medications or change some money quick.

You can download a print version of the city map of San Jose and the self-guided walking tour. The link is in the right column of this page.

Our start is at the Mercado Central in the Avenida Segunda. This, covered, marketplace exists since 1882. This is the place to purchase fresh exotic fruits, fresh meat and seafood, coffee and all kinds of souvenirs. In the early morning this is a busy place, because the fresh products arrive. Fish that has been caught at night on the pacific coast arrives on trucks from Puntarenas. Furthermore, this is a good location to eat breakfast, there are several small restaurants inside. These kind of, basic restaurants that serve typical costarican dishes are called "Soda" in Costa Rica.
The ones that can't wait any longer should take this option, we recommend a small little soda a little bit later on our tour. 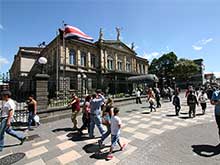 The Teatro Nacional at the Plaza de la Cultura.

We continue walking 5 blocks further East, on the Avenida Segunda, towards the South till we reach the Plaza de la Cultura. You reached the building of the well know National Theater. It was built in the time from 1891 till 1897. The opera house from Paris was the blueprint. One must pay an entrance fee to visit the theater, otherwise one only reaches the entrance hall. On the left, inside the theater, is the The Alma de Cafe coffee house. All kinds of coffee, delicious cakes and small meals are on the menu. This place is open from 8am till 7pm from Mondays to Saturdays, on Sundays it already closes at 6pm. Whom asks to visit the bathroom in the coffee house is allowed to get a small peak of the main building, the bathrooms are located in a side wing of the National Theater.

We return to the Avenida Central, after walking half a block to the East, we turn left. If we would turn right on the Avenida 5 instead we would reach a franchise from Scotiabank. There is an automatic teller machine and inside the bank one can exchange US dollars for the Costarican Colones.
Turning to the left we encounter the Teatro Variedades on the right-hand side, it's inauguration was in 1892. It was one of the first theaters of San Jose and the first movie cinema of the capital. In 1999 the building is protected as a historical monument it was declared as an architectural cultural monument of Costa Rica.

Our walk continues on the Avenida Central, after 3 and a half block we pass a Mas por Menos Supermarket on the left-hand side. Anyone who need water, insect repellent, sun lotion, etc. can get it here.
1 and a half crossroads later we pass the Jade-Museum and reach the Plaza de la Democracia. The National Museum and a butterfly garden are located on the east side of the square. From the courtyard of the museum one can enjoy a beautiful oversight of San Jose.

We walk further up the hill, passing the building of the National Museum, and turn right. This is a beautiful pedestrian walk lined with palm trees. This is an area where several government buildings are situated. We pass the entrance of the National Museum and walk till the end of the pedestrian walk. This is where the Costarican courthouses are located. We turn left and on the next but one crossroad we turn right. You should see it already, the Soda El Casado Feliz, the perfect place to have a costarican breakfast. This small restaurant is only open from Mondays still Fridays from 6am till 6pm. They over several variations of the costarican Pinto, the traditional dish for breakfast. The coffee is served with a typical chorreador, it is poured at the table. It can't be fresher than that! 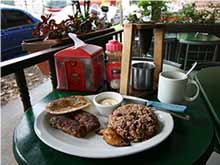 The typical breakfst dish in Costa Rica, pinto and coffee.

After an energizing, hearty breakfast we walk up Calle 21. At night this area, and the bars and restaurants, are filled with a young crowd. On hour left we pass the Bar Bahamas and La Teta de la Malta, before we turn right in the fourth crossroads. We are on the Avenida Central, again. On the next corner we turn left. The Cine Magaly, movie cinema, is located on the right-hand side. It exists since 1978. 180 solar panels cover an area of 340 square meters on the roof, producing 90.000kWh per year. This equates to 90% of the electricity consumption of the cinema.

We are in a part of San Jose that has a vivid nightlife. Across the road from the Cine Magaly is the Observatorio. At this venue one can dance almost every night to live music. Dining and just watching the dancers and listening to the live music is an option, too. The weekly program includes a lot of salsa music, romantic music and stand-up comedy.

Right around the corner is the Cuartel de la Boca del Monte, a restaurant, bar with a stage for lie bands. The Monday nights at the Cuartel are a classic, that's when the reggae band Marfil plays. 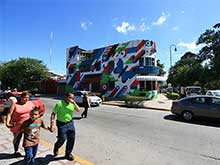 The center of San Jose.

We take the next crossroads, Avenida 3, to the left. On the right-hand side is the Estacion del tren del Atlántico, the train station. The building was finished in 1908. Meanwhile the short-distance railway transportation operates from this train station once again, it was standing idle for many years. It is nice that this historic building has been reawaken since the trains service has been reestablished in the central valley.

On the next square we enter the Parque Nacional. One of many green parks in the center of San Jose with several benches to take a short rest. We walk across the park lengthwise and turn right at its end. We follow the road till Avenida 7a. We follow the road to the left and turn right at the next option, Calle 15. Café del Mundo is located on the next corner. The restaurant is surrounded by a wonderful garden, a great place to have a meal or a drink.

We continue our walk another 2 blocks. On the way we pass a piece of the Berlin Wall. It is a present from Germany and stands in the courtyard of the Cancilleria Costarricense, Ministry for Foreign Affairs.

We turn left and pass the Casa Amarilla, this is an often-used landmark in San Jose. The building is an example of neo-colonial architecture in San Jose, it was built in 1920 by the US-American architect Henry D. Whitfield. We cross the road and walk through the small Parque Espana. The Escuala de Hierro is located on the opposite corner. The building is, like the name indicates, out of metal. It was designed by the Belgian architect Charles Thirion, several reasons led to the decision of using metal as the main building material. It was cheaper than a construction out of stone and much more elastic, and therefore more resistance in case of an earthquake. In opposite to wood it was not prone to fires. In the 1892 the load of more than 1000 tons of preconstructed parts reached the port of Limon. in 1896 the building, that since then houses a school, was inaugurated.

We continue our tour of San Jose and pass through the Parque Morazon. In the pavilion one can often observe street performers practice. Another block down the road is an Auto Mercado Supermarket. Two crossroads further, again on the right-hand corner, is a branch of the Banco de Costa Rica. If one needs to change some US-dollars into Colones he or she can do it here. After another block we turn left. On this corner there is a branch of the Fichel Pharmacy. They offer sun lotions, toothpaste, skin care products and drugs. On the other side of the square is the central post office, the building was finished in 1917.The Café Club Union in front offer desserts, all kind of coffee variations and lunch specials.

We walk further till we reach Avenida 4, this is a pedestrian walk again. There is even a bicycle lane. The pedestrian walk ends in the Parque de la Merced and the church, Iglesia de la Merced. The construction time of the church took 13 years, from 1894 till 1907. This is where our self-guided tour through the capital of Costa Rica ends.

We hope you enjoyed exploring San Jose and that our guide was a help for orientation and not getting lost. We are always happy to receive feedback, constructive criticism and suggestions. Please recommend us!